I don’t know how many times I’ve posted about pulled pork.  Maybe one, maybe more than one.  I’m too lazy to go back and check.  But I want you to throw away all those copies you printed of the previous pulled pork recipes I’ve posted.  IN THE GARBAGE! This is the only pulled pork recipe you’ll ever need.  Well, unless you need an Asian flavor.  Or BBQ.  But for tacos, this is IT.  I had every single spice needed in the cabinet already.  No chopping (unless you garnish with veggies which require it) and it calls for a smaller piece of meat, which is nice because then you’re not shredding forever.  This meat turned out to be the most tender pork I’ve ever slow cooked and the flavor was unforgettable.

Scant pinch of ground cloves (even though this recipe called for only a small amount of cloves and cinnamon, I felt like I could really taste it in the meat in the best of ways)

Sliced radishes (we did not try it with radishes this time but we do love radishes!)

Thinly sliced cabbage (I like red cabbage OK, which is what I used for the first few tacos, but red onions were a much better complement.  They had more crunch and great flavor)

Warm tortillas, corn or flour (I used corn since I’ve read they’re a little healthier and warmed them in a non-stick pan on medium for about a minute on each side just before putting the tacos together)

Salsa (We used medium Pace chunky, but I think pico de gallo would go so much better with these flavours) 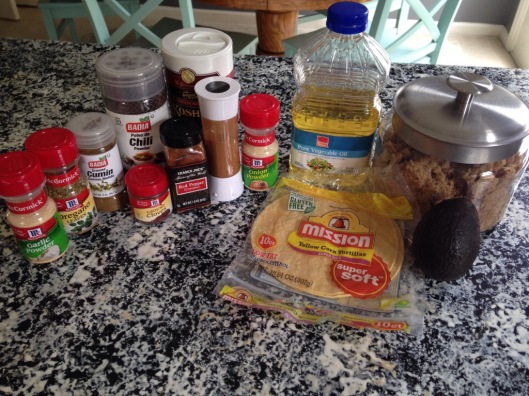 I forgot to take this pic before making the recipe, so, not pictured: pork shoulder, salsa, cheese, greek yogurt

1 Whisk together the rub ingredients in a small bowl.

2 If the roast is tied up with butcher string, untie it. Pat the roast dry with paper towels. Rub the spice mix into the roast all over, reserving any leftover spice mix for later. Let sit at room temperature at least one hour or chill overnight. (I chilled overnight)

3 Heat vegetable oil in a frying pan on medium high heat. (If you are using a slow cooker with a removable container that can be used on the stovetop, use that, otherwise use a separate pan.) Place the roast in the pan and brown on all sides. (I have never done this before slow cooking and it may well be the best piece of advice I’ve ever gotten about slow cooking.  I’m not sure if this was the magic that made this such an amazing recipe, but just in case I am going to do this a lot more often, and certainly every time I make this one! I just did a few minutes on each side)

4 Place the roast in a slow cooker, and add any reserved spice rub. Cook on the low setting for 6 to 10 hours, until the pork is fall apart tender. (I believe I did about 8)

I was concerned that this might turn out dry, as I don’t believe I have ever made anything in the slow cooker without any additional liquid.  However, apparently pork shoulder is fatty enough that it creates its own liquid and it is absolute perfection.  I also like that I didn’t have to strain the meat out of the excess liquid every time I wanted to use it. 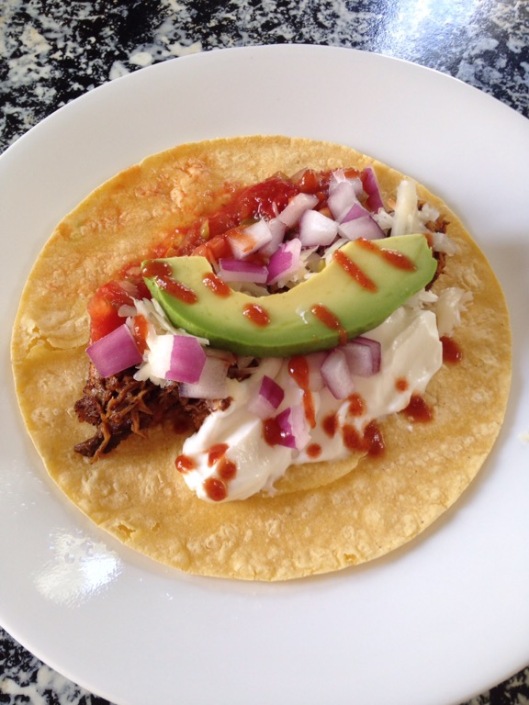